During the Open House London 2019 weekend, I visited two community gardens: The Phoenix Garden in West and Cody Dock in East London.

Both could not be more different in their origins, current program and plans for the future. Yet, both have something in common: sustainability is very high on their agenda. Both share the “There are no such things as weeds in our garden” approach to ornamental wildlife urban community gardening and are fully on board with the sustainability principles. Private gardens and other public spaces could learn from their example.

The Phoenix Garden, St Giles, LB of Camden. The community garden, of app 1500 m², opened in 1984 on a former bomb site by a group of volunteers. An oasis within a busy city with a focus on wildlife and a natural garden that requires minimal maintenance. As the garden’s web states:

“The garden is maintained using sustainable techniques and an innovative approach to wildlife gardening.”

“there are no weeds

there are no pests

there is no need for water

there is no waste”

The new pavilion has been constructed in 2016: “a building that is part of the garden not a building in the garden”. A place to hosts community events, workshops and for hire. The biodiverse brown roof, rainwater collection, and propagation area on the rooftop are in line with the garden’s sustainable principles. This holistic approach created an incredible habitat for urban wildlife. During the short time I spent there, I shared a company of two different birds and countless insects.

The garden is not fully ‘wild’ though. It is obviously an ornamental communal space, with garden rooms, outdoor classroom, curved, brick paths that invite you to explore and to seat on carefully placed benches. The planting follows the wildlife garden style, influenced with the new perennial wave (or is it the other way around?): a mix of trees, shrubs, ornamental plants with spectacular Euphorbia characias and Echium pininana – attractive for pollinators, and weeds e.g. Urtica dioica, common nettle, all on the same terms. Benches: timber and stone, logs, planters, and a sculpture of a horse head fulfill the picture.

The Cody Dock, Canning Town, LBof Newham –  tidal river dock at London’s second river – Lower Lee. Originally opened in 1871 as a working dock, to unload coal for coal gas. After the dock closed, years of degradation followed until, in 2009, the Charity Gasworks Dock Partnership (GDP) was created, to lead the community-led regeneration focused on the river, industrial heritage, art, culture, conservation, and ecology. Volunteers (5,000 of them) cleaned up the site and in 2011 two tidal live/workboats moored. In 2013 a 999-year lease was secured by the charity and in 2017 a planning application for further development as a creative industries quarter has been approved, with PUP architect’s masterplan (plan). Soon, the Lower Lee River path will be open (part of the Lee River Park, Leeway) connecting the Olympic Park with the Royal Docks and the River Thames. In 2020 a unique ‘roller bridge’ (designed by Thomas Randall-Page) will be installed (CD web).

The Cody Dock is not a garden, it is a community multifunctional space and there are many things that it has to offer:

The sensory garden also called the Dancing Grass garden thanks to the plant selection with 6 types of grass, among others: Calimagrostis x acutifolia: Karl Forester, Overdam and Waldenbuch; Briza media and Hakoneodoa macra. The sense of hearing is stimulated by the rustling of dry grasses and Dianthus carthusianorum flowers. The sharp edges of Carex buchanani contrast with soft, thick and hairy leaves of  Senecio cineraria ‘Silver Dust’, and Juniperus squamata provides all year interest and spiky touch.  The smell of Lavandula and splashes of yellow and pink colour flowers will complete the sensory experiences. Tactile low retaining walls and paths lead visitors in meandering movement, suitable for the Dancing Grass garden, to the outdoor classroom, where during Open House weekend visitors could do their own wildflower seed bombs.

The Gravel Garden, the new coastal style garden with a boat and red phonebox bench. Build this year, with planting e.g. Carpobrotus acinaciformis, Agapanthus sp. yet to be established but already award-winning design.  A very interesting addition to the site, perfect photo spot.

The gardens received 3 London in Bloom awards: ‘Outstanding’ ‘Gold’ and the ‘RHS National Certificate of Distinction’!

Both gardens are drought resistant and low-maintenance, designed for climate change. ‘There are no weeds” as we were told again when discussing planting design and food growing beds. The guide also told us:

It is not possible to say if all 12 Permaculture principles are applied at the Cody Dock but the feeling of people care, community and making difference are profound. 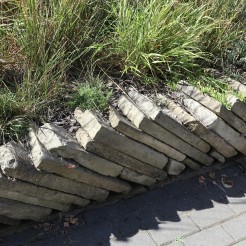 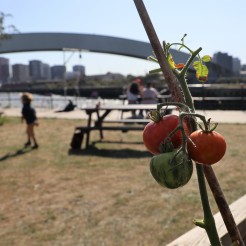 tomato from the Dock

The Phoenix Garden and The Cody Dock are two examples of how community-led, bottom-up change happens. The tranquil garden in the busy heart of London was created, is maintained and will thrive thanks to volunteers’ engagement. The regeneration of post-industrial dock and wasteland were triggered owing to the determination of two moorings boat owners. The successful collaboration between the charity organization, local authorities, businesses, and residents creates a sense of community neighbourhood pride and leads to the rediscovery of Lower Lee river with her fantastic wildlife.

In both examples a new environmentally responsible garden style/trend is present: the ‘there is no such thing as a weed’ garden, with low maintenance, and drought-tolerant planting, with food growing and organic, permaculture elements. They are ecological, enhancing wildlife and responding to the climate emergency gardens.